Sorry it has been a while since I’ve posted anything, its been quite a chaotic few weeks with school term papers and starting work. But luckily I found time to finish this tutorial series! The tools used in this tutorial are the same as in the past tutorials: a Wacom Drawing Tablet with Stylus and the Computer Program, PaintSai.

Step 1: Base Color
While this step is simple, it is slightly different than in Previous Tutorials. For this Tutorial, we will separate the Clothing into Different Folders. One for the Vest, one for the Shirt, and one for the Pants. Keeping these parts in Separate Folders allows for us to complete each segment easier.

Step 2: Shading the Vest
In the Vest Folder, create a New Layer over the Base Layer and set it to Multiply, selecting the Clipping Group to keep the color within the Base Layer. When Shading Clothing, it is a good idea to consider how the Clothing would appear on a real human form. Which parts of the Clothing would hug the body at certain areas. I would suggest taking time with this as it is rather difficult.

Step 3: Blur the Shading.
Selecting the Blur tool, start to slightly blur the edges of the shading that was just applied. For this step, judgement on how much blurring is completely up to the artist. I find that under her left arm, I kept the area relatively dark with minimal shading compared to the rest of the vest. This allows for the sense of Depth. It may take several attempts to get the perfect result you seek, but practice makes perfect.

Step 5: A Bit of Texture.
On a New Layer, beneath the Shading Layer, also set to Clipping Group and the Layer Type to Multiply. In this Layer, using the Airbrush Tool, add a slightly brighter tint to the vest to add some definition. Since the vest is Dark Grey, I only added a slight bit of color to add some texture to it but still keep the vest Dark .

Step 6: Shading the Shirt.
Same with the vest but for the Shirt Folder, add Shading in the New Layer above the Base Layer. When adding Shading to a Shirt, remember that no Shirt is ever perfectly smooth. There will be some parts that are wrinkled or folded. Often times it is easier to add in the wrinkles and folds in the sketching part of the drawing, but it can also be done with shading as well. Practice adding in the folds and wrinkles until you find something you are happy with. 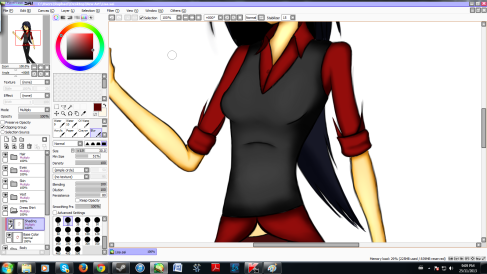 Step 7: Blur the Shade
When Blurring the shirt, I find using a very Minimal Application of the Blur Tool to soften the lines rather than a liberal use of the tool is much more Effective. This way the wrinkles and folds are still apparent and the depth of the Shirt is still visible.

Step 8: Adding Textures and Lighting to the Shirt.
This step can be done in a number of different ways depending on the style of shirt the character is wearing. For this character, her style is more business attire so I decided she would look good in a nice silk red shirt. For this effect I simply created a New Layer underneath the Shading Layer (Just like the Vest) and used the Airbrush tool with the most vibrant shade of Red. It should also be noted that this Layer, unlike the others, is kept at Normal as setting it to Multiply is too dark and setting it to Luminosity is too bright. 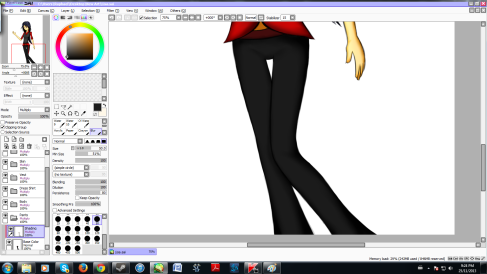 Step 9: Shading the Pants.
Now depending on the Gender of the character, this can be quite tricky. For this character, since she wears Business Attire I kept her wearing dark pants. However it should be noted that no matter how Black a piece of clothing may be, when it is in Light it will never be Pure Black. As with these Pants, they are not colored with Pure Black but rather a very Dark Shade of Grey. Even the color used to Shade was a Darker Shade of Grey rather than Black. When Blurring the pants, I find that since some styles of pants (like the one this character is wearing) are very form-fitting and therefore don’t have the same wrinkles and folds issue as the Shirt. Therefore when Blurring these pants, a Gradient from the Darker color to the Base color is acceptable. But remember that no matter how form-fitting clothing may be, there will still be a wrinkle or two here and there. 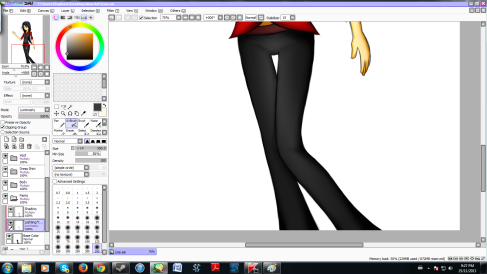 Step 10: Adding some Light.
Final Step! Yay! Add a New Layer below the Shading Layer and set it to Luminosity with the Clipping Group box selected. Now select the Airbrush Tool and select the size to 350. With one very Light Swipe, do One Brush Stroke across the Layer. This will often create a nice effect that adds Depth to the Gradient created earlier.

I hope that my tutorials have been very helpful! Again I apologize for the very late post but I hope the wait was worth it.